The XMP-64 is an experimental single-board distributed-memory parallel computer with 512 hardware threads and is programmable with a C-like language. It was developed by XMOS in 2009 to demonstrate the scalablility of the XS1 architecture. Since then it has been discontinued but remains a fascinating device from the point of view of providing a huge amount of parallelism that is programmable in a simple way. As such, I thought I would record some details and images of it here.

The XMP-64 board contains a four-by-four grid of XS1-G4 chips, each with four processor cores, and with core providing eight hardware threads. The G4 chips themselves are connected in an order-four hypercube topology, with every G4 connected directly to four others. The G4 has 16 links, so four links are used to connect each direction. The data rate of each link is 400 Mbits/second, or 1.6 Gbits/second in each edge of the hypercube. The bisection bandwidth of the entire network is four times this again, at 6.4 Gbits/second. Each processor core has 64 KB of SRAM memory and runs at 400 MHz. The whole XMP-64 array therefore provides 512 threads, 4 MB of memory and a peak performance of 25.6 GOPS. (There are more details in the performance experiment document linked below)

Since the G4 is an embedded processor, these performance numbers are not competitive with contemporary CPU or GPU devices; it does however burn only a few tens of watts of power, provides deterministic (completely predictable) execution of 512 threads and provides a very simple programming interface. 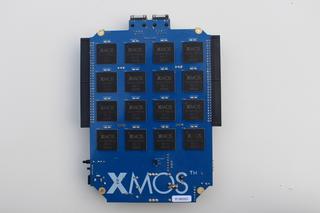 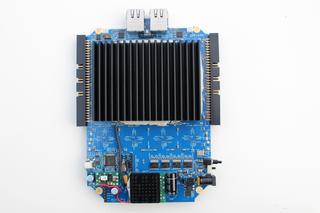 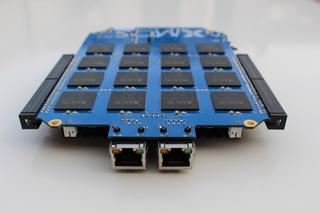 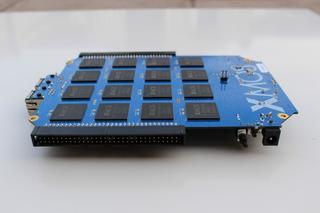 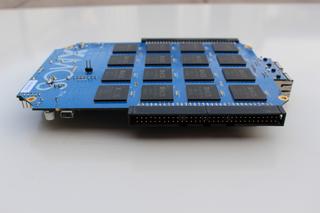 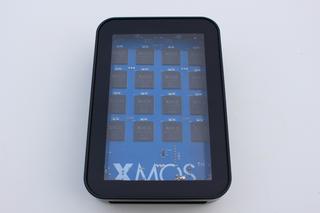 As you can see in the pictures, there are two Ethernet interfaces at the top of the board, which could be used to daisy chain multiple XMP-64 boards together. Additionally there are 64-pin headers on either side that expose general-purpose I/O pins connected directly to processors in the array.

Below is an example program for the XMP-64 written in XC, a programming language based on occam designed to target the features of the XS1 architecture. The program uses a ring topology of communication channels to connect one thread on each chip. As a token is passed around, the LED connected to each G4 is switched on for a short period.

As an intern at XMOS in 2009, I did some work to investigate the performance of the XMP-64. This is written up in the document linked below. It looks at the performance of barrier synchronisations and exchanges of various permutations of source-destination pairs. Sadly though, to my knowledge, the XMP-64 didn’t see much further use or experimental application development. However, a similar board was developed by the Swallow project, which used XS1 chips (12 cores per board) and allowed direct expansion of the network with multiple boards up to 480 cores. See the research paper (ArXiv) for more details.

Please get in touch (mail @ this domain) with any comments, corrections or suggestions.